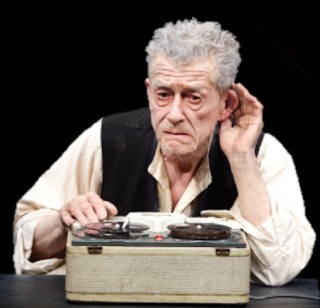 Krapp's Last Tape was written by Beckett in English, for the Northern Irish actor Patrick McGee and was first performed in London in 1958 under the direction of Donald McWhinnie. The play contains many of the elements of Beckett's 'art of failure': a body in decline and suffering; the replay and re-evaluation of memories; loneliness, the sense of immanent darkness; eloquent silences and a mind/body dualism.


When he wrote it he described it as 'a play for one actor' and did not mention the tape recorder and Hugh Kenner tells us that at this stage he had never actually seen a reel to reel tape recorder but that the 'rumour was sufficient'.   Early critics were very taken by the way in which Beckett developed the monologue by means of the recently invented machine, and how he recognised its potential to correct and recall memories. This device allowed him to present three distinct versions of the one character, the older sixty-nine year old Krapp whom we see on stage, the recorded voice of the younger thirty-nine year old Krapp and the allusions of both of these to their younger twenty-seven to twenty-nine year old self,  whom they both deride - 'Hard to believe I ever was that young whelp! Jesus.'


The eleven page play lasts for just under an hour, indicating the importance of the silences in Beckett's work. The recordings of the younger man, and his mature reactions to them, are not simply there to 'bail out the silences'. In Krapp's Last Tape the accuracy of the machine's recordings are contrasted with Krapp's inability to remember the profound events of his life and so the voice from the machine holds significance and seems to bring about an awareness in the older man. Of course he tries to resist the awareness by drinking and by cursing 'the stupid bastard I took myself for thirty years ago'  but the silences indicate that perhaps he does not resist it completely. The ambiguity of the phrase 'Ah well, maybe he was right (pause) maybe he was right' seem to support this idea. Given that at sixty-nine he recalls nothing of the experience, it is likely that this awareness is temporary, that it will also be forgotten in the future, and it emphasises an idea central to Beckett's work that 'people are bloody ignorant apes'.


In the current production at the Gate Theatre in Dublin, the voice of the thirty-nine year old Krapp is that of a younger Hurt, recorded in an earlier performance in March 2000 at the same theatre. The production emphasises the duality of light and darkness which is written into the text. The light/dark dichotomy can be seen as 'a further expression of Beckett's concern with man's basic dualism, the Cartesian separation of mind and body.' (Fletcher and Fletcher, 1985, p.120)  In this production, the lighting follows the original direction with the sole source coming from the lamp above the table. Hurt plays within this liminal space, stopping just outside the edge of his lighted area and drawing quickly back into the light, delineating it for the audience.


The voice on tape reminds the older man of a 'memorable equinox', a day in which there is an equal amount of light and dark, and which the older Krapp had all but forgotten. This was the time when the 'shade came down' as his mother died and when he bade 'farewell to love'.  The recorded memory of this day is repeated and the lyricism of it highlighted by the repetition.

I asked her to look at me and after a few moments (pause) she did, but the eyes just slits because of the glare. I bent over her to get them in the shadow and they opened. (pause) Let me in. (pause) We drifted in among the flags and stuck. The way they went down, sighing, before the stem! (pause) I lay down across her with my face in her breasts and my hand on her. We lay there without moving. But under us all moved, and moved us, gently up and down, and from side to side.

The rhythm of the water, caught here by the younger man hints at his ability as a writer,  yet at the same time we see his inability to grasp the possibility of love.

Fletcher and Spurling draw attention to this poetic quality when they write that 'sheltered under his most rebarbative title - with its triple allusion to excrement, disillusion and machinery - lies Beckett's most lyrical and tender play.' ( 1972, p.88) But Krapp's Last Tape is  also shot through with moments of humour and bathos. We have the clown-like business with the banana skins at the opening of the play, the description of Krapp wearing 'Rusty black ... trousers too short for him [and] ...a surprising pair of dirty white boots, size ten at least' and the irony of the older man, laughing with and at his younger selves.

Hurt switched easily and comfortably between these lyrical and whimsical moments to the realisation of his loss and to the 'profound gloom' and 'misery' of his condition.  Juxtaposed with this lyricism and humour is the threat of the darkness and what it might contain.  In the 1969 Berlin production, Beckett, directing Martin Held, told his actor that the reason Krapp glances behind is that 'death is standing behind him and unconsciously he's looking for it [because] it's the end … he's through with his work, with love and with religion'. Hurt sustains this moment of uneasiness for just the right length of time to draw our attention to it, before moving on with the action of the play.


In this memorable performance John Hurt held the audience in the opening scene as he sat silent and immobile for at least two minutes, giving us that sense, which we often find in Beckett's plays, that what is on stage is surrounded by a vast silence and darkness. The only thing that holds this emptiness back is the light and the voice of the actor. The fading out of that light and voice at the end of the play are a powerful reminder of the common fate of those born astride the grave. The death of the light in this production left the audience moved and subdued to such a degree that  that it delayed our ability to applaud the performance. When the house lights came up the spell was broken and Hurt received a well deserved standing ovation.