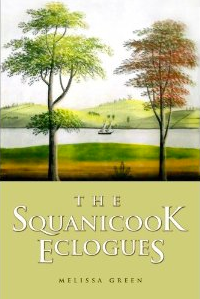 Melissa Green is 'a poet’s poet', quietly garnering the respect of such distinguished voices as Derek Walcott and Joseph Brodsky, whom she translated for a recent collection of nativity poems.  In The Squanicook Eclogues Green presents four unique poems of such grace, craft and awareness that her particular space and time are swiftly elevated to the universal. The collection calls to mind Rilke’s ‘Sonnets to Orpheus’ where he writes that:
Song is being. Easy for a god to teach
But when will we be? When is he turning

earth and the stars into our existence?
This is not, youth, that you love, even if
your voice shoves your mouth wide open. Listen,

singer, forget that you sang out. All's going.
To sing the truth you need another breath.
Breath about nothing. Wind in the god. Blowing.

In The Squanicook Eclogues she appears to have acquired this ‘other breath’, which although not god like, is more intently alive to the song and being of the world than most ordinary mortals are. Melissa Green's awareness of the phenomenology of her local ecology, of the interplay of time and timelessness which her study of nature affords, produces a calming meditative effect unmatched throughout the vast libraries of Western poetry and calling to mind the best of the Eastern poets - Japanese, Ottoman and Persian.  The role which biographical details appears to play in the collection is important, but perhaps their ultimate importance is in showcasing Green's ability to transcend her personal legacies. The narrator of her poems seems to imply that she is very much a presence, that she has not quite forgotten, as Rilke recommends 'that [she] sang out' but by the conclusion of the book this narrator has stepped out of her biography into the role of the artist, and now looks back to incorporate only those aspects of her legacy which serve her new role. In the closing section of ‘Decoration Day 1920’ she tells us that she is

…done with legacies, all striped by welts
Of war, and dare myself to die, infirm
and greedy as my kin, when in my eyes
there rises up a slender, laughing form,
and suddenly my resolution wilts –
my lover, Wilfred Owen, threads the maze,
death’s honor guard, lieutenant to the Muse,
who’ll bend me in consonantal waltz,
And take me down to dinner on his arm.

Living in the moment she seems not to have anticipated her own resurrection and in a beautifully circular effect, the newly arisen artist can give shape to her biography incorporating only what she needs of her life to create the poems which we have read. The transcendence of biography becomes therefore a theme in itself throughout the collection, not only the transcendence of hurt and pain, but the flight of the mature artist beyond the experience of the emerging artist.


Responsibility and delight are the tone of the true poet, a joy in
the craft that supercedes it's themes however afflicted, and on
every page of this book Melissa Green’s reverential elations
uplift and soothe the reader as naturally and cleanly as the morning wind?

This ‘joy in the craft’ is evident throughout the book and harmonises with the untameable aspects of nature which her poetry engages fully with. Green's American English brings in aspects of her locality and experience which acknowledge it's personal ecology, its recent history and its distant native American inheritance - especially in place names and the translations of those names. Her more distant European heritage is present when she introduces ideas and words which carry strong Greek and Latin classical allusions - for example in the poem 'Water' she carefully places the word 'stone' with the word 'lithe' deliberately calling to mind the Greek  'lithos' (stone), and in 'Decoration Day' quoted above, the reference to the thread and the maze recalls the Greek legend of Theseus and the Minotaur, and perhaps the Latin retelling of such stories. These deft touches can make one laugh in recognition and delight, but never encumber the poems or prevent the reader from travelling swiftly on as the river does. In 'Water'  the poet 'carries in her supple / Body' the story of the river through the language itself,  and  encourages her readers to share an Aristotelian sense of wonder, embodied here as  'a long-legged doe, [who]    / Drinks in deeply, as all instinctive creatures do,    /And laughs, leaping the current, printing the field with dew.'

'The Squanicook Eclogues' is the first of the four long poems in the book and is organized, into four seasons, each of which has four sketches leading up to a different element. In the first season entitled ‘April’ the element evoked is ‘Water’:

Father, I’m drowsing in April’s humming sun and think
A girl the color of autumn kneels at the Squanicook’s bank,
Who is the river’s daughter, dressed in driven skins,
Who knows a cedar wind at Nissequassick brings
The schools of alewife, herring, yellow perch ashore.
The Place of Salmon roars with light. She steps, sure-
Footed onto stone; lithe as a poplar, bends over
The water. Wren feathers, shells, seven quills quiver
In her sable hair. Her eyes, a spring-fed stream,
Like Silica, seek bottom. Deep in her mossy brain,
The white-tailed mouse is born. She carries in her supple
Body all of spring – a tree frog in the apple,
A kit fox dozing in the brush, a brash otter
Diving her river-veins – the new, young, utterly
Green morning beads her skin. How simply she leans
Into understanding, baptized by light and the delicate lines
Of shadow from cedar. A goldfinch has flown its ribbed nest,
Dusting her cheek with its wing, a hummingbird throbs in her wrist,
She is drenched in waking. Wonder, a long-legged doe,
Drinks in deeply, as all instinctive creatures do,
And laughs, leaping the current, printing the field with dew.

The structure and order of the collection is Apollonian, but serves to make the wilder Dionysian music of her landscape audible to the reader and both aspects are fully overseen by Green.  The rhyming couplets above evoke the movement of the water, flowing around and over the starts and stops. There are full stops throughout but only once placed at the end of line,  where it's interruption imitates the destination of the schools of fish which are brought ashore. Notice how the poem is resolutely in the present tense, because it is only the present river, and each successive presence which is important. Syntax is brought into the service of the physical world when line six hyphenates into line seven, imitating the ‘sure-footed[ness] onto stone’ of the river.  The history and culture of the region is present in the names, Nissequassick - a hill close to the seashore - whose breeze naturally seems to herald the arrival of fish such as the ‘alewife’ who return annually to freshwater to spawn. ‘Squanicook’ and its original meaning (‘The Place of Salmon’) are invoked in what the Irish would recognize as  ‘dinnseanchas’- an acknowledgement of the lore and tradition of the locality contained within its place names. Here Green uses both the original and the translated name, evoking the all embracing history of the terrain  which has preceded and will survive any race which claims it  just as the river exists only in the moment and yet still abides through time and history.

But while recognising such mastery and 'joy of craft' which Green brings to her work it is secondary to the overall achievement of the collection. Green never allows the complex forms and patterns to overpower the immediacy of being which is found throughout The Squanicook Eclogues.  It is not simply that she is paying close attention to her immediate world, but that her sensibility appears to merge with that world. From the very first page, Green immerses her reader in her locality and her particular experience of it, to such a degree that it becomes a window out to the universal. Her poems so acutely catch the present moment that they become timeless.

This collection is intended to be understood on its own merits and so, although Green has also published her autobiography Color is the Suffering of Light I thought best not to read it until I had read her poetry. Hailed by Amy Clampitt as “a born, a natural poet," the traces of  autobiography which do occur throughout the poems hint at the huge cost of being born with such an attuned sensitivity. The first poem appears to be addressed to her father, while those of 'The Attic Bird' address her family and particularly her mother. She brings in local history and concerns, such as the stories in 'The Housewright's Mercy' about the architect Joseph Wright, his achievements, family and death. Always these details are put to the service of her craft and make a point about art, craftsmanship and humanity. The opening lines of 'The New House, 1802',  reads:

And these are recalled in the closing lines of the final section of this poem where Wright,  his ax and his craftsmanship are invoked once again:

Who knows what heaven is? Or if we're left
with Joseph shouldering his ax, the girth
of ringed infinity's elm - to try and glimpse
through darkness Martha's incandescent lamps.
Does broken Carthage most resemble death,
or do those workmen on the roof who lift
a horizontal beam, stripped to the waist,
still forge the final crosspiece of the West?

This image announces Green's intention to carve her own materials into the stuff of eternity, a task which she certainly achieves by the end of the The Squanicook Eclogues.  This short review should give an indication of the depth, skill and pure joy which Green brings to her poetry. This collection  will no doubt be studied in universities throughout the world and the critical theories associated with phenomenological studies, eco-criticism and eco-feminism  may all be brought to bear with regard to it's various layers - and in this case deservedly so,  carrying as it does the depth needed for such study and the weight of genius with it. It examines the history of her growth as a family member, as an American and as a poet and provides a cross section of twentieth century life which I have no doubt will intrigue future critics.

However, more than this, this collection deserves to be read, and loved and re-read, and eventually passed on to future generations. 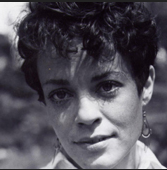 Melissa Green's work has appeared in Yale Review, Agni, Review, and The New York Review of Books. She has translated poems by Joseph Brodsky for a recent collection of nativity poems. The Squanicook Eclogues, four long poems that weave memory and landscape with an almost religious understanding of the passage of time, received the Norma Farber Award from the Poetry Society of America 1989 and the Lavan Younger Poets Prize from the .

The Squanicook Eclogues are published by:

The Pen & Anvil Press and is available