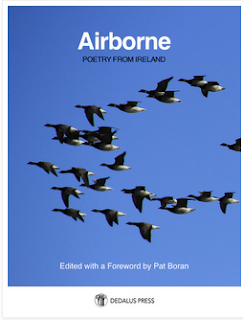 Airborne is a collection of over one hundred and fifty poems by twenty-nine poets, born or living in Ireland. It is an absolute delight, and more than that, a living record of the vitality of the poetic tradition in Ireland.  Seven of the poems are read by either the poet or by an actor. The musical performance of ‘Night Start’ by Paddy Bushe, is a modern, playful, reminder to us of the tradition of setting poems to music, followed by Yeats and Joyce and more recently by Leonard Cohen.

Many of the poets are established. They have already found their unique voices and have something clear to say.  They draw deliberately on the tradition of the fÍle in ancient Ireland, and on other ancient traditions to create poems that are personal, non-conformist, rooted in experience, sophisticated and relevant. As expected from a living record, the poetic forms throughout Airborne vary from Leland Bardwell’s deliberately varied stanzas within each of her poems, reflecting the unique and marginalized characters which she portrays, to the beautifully crafted curtailed sonnet of Padraig J. Daly in Raifteri which seems to invite a dialogue with Gerard Manley Hopkins’ nature sonnets.

The themes explore the dignity of outcasts, their ‘vulnerability and villainy’, the relationship of modern Ireland to urbanization and to nature, the place and possibility of the imagination and the role of the artist. There are many very personal pieces, such as the beautifully controlled expression of grief in Katherine Duffy’s What We Bring, which cries out to anyone who has experienced the shock of loss. Irish, English and Greek mythologies are invited into the debate to counterpoint modern Irish lives.

Editor and contributor Pat Boran tells us that ‘it is intended as a general introduction to contemporary poetry from Ireland… [and that] for newcomers to the subject, it will provide what I hope is an approachable and accessible point of departure for further explorations.’ The wide selection of poets and poems, and the high standard throughout make it the best general introduction available at the moment, and possibly for years to come. I would go so far as to say that no one can consider themselves informed on the dynamic writing which Ireland has produced until they have read this book.

Such a book does not come along very often and Dedalus have produced a very fine collection here, one that should find its way onto every poetry course in universities around the country.

Airborne can be downloaded here:
http://itunes.apple.com/us/book/airborne-poetry-from-ireland/id524531725?mt=11