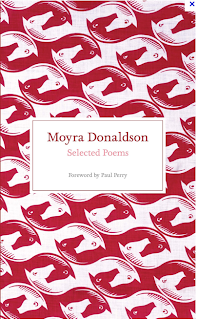 
Moyra Donaldson has assimilated the powerful
influences of Yeats, Hewitt, Hughes, Longley
and Heaney, together with
Plath and Liz Lochhead, to present a
hard-won distinctive self…’

Moyra Donaldson's poems are strong, urbane and sophisticated, she incorporates myth and metaphor with glimpses of her own biography and cultural inheritance  and creates from these influences a series of memorable and exquisitely crafted poems. Her Selected Poems provides a  welcome introduction to her work bringing in poems from each of her previous four books of poetry. What emerges is a distinctive poetic voice, controlled but also compassionate.  She is an artist who knows the value of painting with dark colours and of providing counterpoints of brightness to illuminate that darkness. From the gradual emergence of a sinister portrait of love in 'How to Feed your Lover' to the outrageous treatment of a young prostitute in 'Mary Patterson', Donaldson guides us with an unerring sense of compassion. Like Plath, she manipulates that darkness for poetic or aesthetic purposes, using it to apply a shock where needed, or to provide an edge to the more lyrical experiences of life. In 'Daffodils' she describes a trip which she reluctantly took with her mother to buy daffodil bulbs and tells us that:

For weeks afterwards, I'd look out the window
and see my mother on her knees, digging,
planting daffodils behind hedge, among trees.

Her mother's subsequent death is announced in a very different tone when she writes that:

My mother has descended into hell
(these biblical allusions haunt me),

These sudden and unexpectedly harse tones provide a shock which helps to fix the ocean of grief that her mother's death threatens to unleash. She distracts herself and the reader with the minor pain of these two lines, almost as a temporary relief from the greater pain which she is describing. This distraction is temporary however, and the relief gained from it only strengthens the impact of the final scene where,   in an image of resurrection, the flowering bulbs become the new testament to her mother. 'Daffodils' is a sophisticated and beautifully crafted expression of grief and a good example of how Donaldson forges her poetry from the darker, weightier materials of her experience as well as from the lyrical  impulses of her craft.

Daffodils - from Beneath the Ice, 2001.
*The Vertues: The roots stamped with hony, helpeth them that are
burned with fire. They have also such wonderful qualities
in drying, that they consound and glew together very great wounds.*
Gerard's Herbal
1
I thought it was a fool's errand, thought
we'd never find the place,
my mother trying to navigate
with only a vague address to go by -
a farm somewhere outside Millisle.
My children bored, fighting in the back seat,
my nerves on edge, my hands too tight
on the steering wheel, stress levels high.

But we got there, loaded sackfuls of bulbs
into the car's boot, and paid the man.

For weeks afterwards, I'd look out the window
and see my mother on her knees, digging,
planting daffodils behind hedges, among trees.

2
My mother has descended into hell
(these biblical allusions haunt me),
and daffodils are the only colour in this Easter,
yellow incongruities across the dull fields,
painfully there, like the resurrection of love.

I cut them against despair, bring
huge bundles of them into the house,
beacons burning in vases, on windowsills.

While the temporary distraction of  darkness shocks us in 'Daffodils', Donaldson uses what appears to be a temporary distraction of lightness to illuminate the world in the poem 'Mary Patterson'.  The murder and dissection of the young prostitute in this next poem brings a historical event back into our lives and highlights an aspect of the deed which questions the role of 'art' itself.  Mary addresses her murderers, downplaying her own death and the fact that the murderers received a better price for her body than she commanded while working as a prostitute. What she is shocked at is something else, something which might seem less offensive and which continues virtually unquestioned today:

Plied with gin, stupefied,
Burke's knee on my breast,
till the life is pressed out of me,
then I'm delivered to your door

and it was one thing Dr Knox,
who buys the beef,
to take my body,
for professional scientific purposes,
for the greater good,
so to speak,

and for certain my body
was worth more as dead meat -
I'd hitch up my skirts
for just a few coins
in the shadows of Canongate,
Whereas you paid seven pounds
and ten shillings -

but to lay me out like that,
naked on the couch,
sensuously arranged
under the flickering candlelight,
my dead face seductively
turned to the audience,
and a white sheet draped
teasingly over my calves,

and then have me sketched
before my dissection -

now that's a disgrace.
What were you thinking?

And you, Mr Ferguson, surgeon
in training, looking at me,
in your professional capacity

as I looked at you in mine
just two nights previous.
You still want to use me?

The central line here reads 'and ten shillings -' and the Judas overtones are no doubt important because this line also separates the scientific 'justifications' for the murder from the purely voyeuristic motivations. Mary, so accustomed to betrayal  to the point where she can even contemplate the idea of a 'greater good' as a justification for her murder, rails however against the betrayal of art. Against the cynical portrait sketched of her dead body, parading itself as art, her voice calls out 'You still want to use me?' But of course Mary's voice is cocooned inside the consciousness of the poem, inside the art of Moyra Donaldson, which allows no justifications, scientific or otherwise, for the girl's murder. By also incorporating the betrayal of the idea of art, Donaldson points to its true function which always allows dignity to human beings, even if it must do so by subtly depicting lives lived without such dignity. Donaldson's portrait of the death scene is therefore stunningly realised and the darkness which she interjects in this poem asks us to examine the value systems which have allowed and continue to allow an individual to be used or sacrificed 'for the greater good'.

But although incorporating the darkness of the human condition, Donaldson does so with enough light to effect a chiaroscuro in the poems. In 'Exile,' for example, the  closing lines are bright and the voice is strong and independent. Along with the opening question, it overcomes and contains the lack of light which is physically central in the poem:

What ground is mine
If I would govern myself?
Where is my country
If neither bogs nor gantries
Speak of me?
Where can I stand
If I am not one thing
Or the other?

My grandfather knew where he stood.
Ancestors planted his feet
in fertile soil, green futures were
named in his name, possessed.
He preached their flinty faith
in mission tents, visions of eternal life
on soft Ulster evenings,

but there was no redemption.
Not in the land, or through the Blood.
Not in the hard lessons of duty, obedience,
with which he marked his children.

He is stripped of virtue,
his legacy a stone
of no magic, no transcendence.
No children ever turn to swans,
wafer remains wafer on the tongue,
and flesh is always flesh.

My two white birds will bring me
water from the mountains,
beakfuls of sweet sips.
I will grow a new tongue,
paint my body with circles
and symbols of strength, mark myself
as one who belongs in the desert.

The narrative voice here exiles herself from rigid authoritarianism which threatens to brand or mark even its own children, and which offers no redemption. By choosing exile the narrator creates a new testament, a biblical desert perhaps but one in which her 'two white birds' allow for the possibility of transcendence and continue the earlier allusion to the Children of Lir where children do 'turn to swans'.  This allusion now takes on the possibility that the birds are also doves, bringing symbols of peace and new life along with 'water from the mountains, beakfuls of sips'.

One of the strengths of the Selected Poems becomes evident in our ability to see across the entire body of Donaldson's work. We can perhaps see more clearly the contrast between the powerful chiaroscuro of the two poems just quoted, and the vivid brightness and Dali-like surrealism in the poem 'Nest'.  Here the narrator engages in a gentle movement or dance of transformation from sleeping figure to bird:

I wake beneath a chestnut tree,
back against bark,
legs stretched out through grass.
Long-fingered leaves drip light
and shade haphazardly: the air
is warm. In front of me, a lake
lies like a mirror, and I break
its surface, wash my face
in its salty, ice-cold water.

My horse is waiting, shaded and patient,
his skin is comfort, his breath green
as he carries me on his back
to the flat stone altar at the forest’s heart.
Being dead, I lay myself down on it
thankfully, and the black bird comes,
lifts me to her round high nest.

Inside the egg
I am a cell,
dividing and dividing,
first heartbeat,
shell-filtered light
warm on my lidless eyes
until time comes
and the shell cracks.

My horse is waiting,
bright and patient:
his skin is sunlight
and his breath air.
Amongst the moss
his bones
are white and dry.

In my beak, I lift
his great rib hull,
his long leg bones,
the instrument of his skull,

and in the highest branches
of the tallest tree,
in wind-tossed waves of leaves,
I build my horse’s nest, my ship of bones.

In contrast to many of Ovid's depictions of metamorphoses the process of transformation in 'Nest' is explored internally, and there is no sense of panic or divine retribution. This process of change and growth is a natural ongoing one, and perhaps more importantly, there is the sense that this process is also a communal one. While Yeats depicts the individual dancer and dance in terms of a single entity, a single ontology, 'Nest' depicts both dancer and dance in the context of companion lives and within a reciprocal and positive nurturing process.  This companion life may be read as the soul, or nature, or as an important companion soul. The internal perspective of the poem makes us more intimately aware of the presence and affect of that 'Other', companion life. 'Nest' therefore offers what philosopher  and author Roman Krznaric calls a perspective of outrospection,  an empathy which can become part of the art of living and which he emphasises is vital for our development in the coming century.

The selection of poems in this book come from the full range of Donaldson's work, from Snakeskin Stilettos (1998), Beneath The Ice (2001), The Horse’s Nest (2006) and Miracle Fruit (2010).  It provides a wonderful introduction and overview of her work which is long overdue. Donaldson's is a remarkable and accomplished voice and her poems are full of the important questions which go consistently unasked and unanswered in our day-to-day lives. However, along with her interrogation of the hypocrisies of this and previous ages, is an empathy with and recognition of the dignity of human life, so essential to the empowerment of the individual.  Selected Poems is a fine tribute to this powerful artist and displays some of the best of her poems to date. 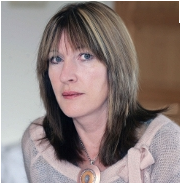 MOYRA DONALDSON
has won a number of awards including:

Four awards from the Arts Council of N.I.;
plus
The Allingham Award;
The National Women's Poetry Competition, and;
The Cuirt New Writing Award.

Her poems have been anthologised and have
featured on BBC Radio an Television.

She has read at festivals in Ireland, England, Canada, America and Hungary.

She has edited a number of anthologies and
was literary editor for Fortnight magazine.