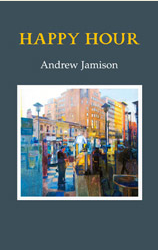 'Poetry which is philosophical, thoughtful, keenly
observant and funny'.

Published in July 2012 by
The Gallery Press.

Andrew Jamison was born in County Down in 1986, and his work has won several Arts Council of Northern Ireland Awards and the 2011 Templar Pamphlet Award. Happy Hour is his first published collection and he has been described as 'a bold new voice of a new generation.'

One of Jamison’s strengths is that he writes about the stuff of everyday life in a language that sounds very much his own. In other words, he makes poetry of the ordinary, poetry that is philosophical, thoughtful, keenly observant and funny. Above all, we hear the voice of an individual.

“Meditation on Ikea” takes as its subject a place most people are familiar with, and wittily finds a form to express the experience. Jamison does this by deliberately constructing his poem as a flat-pack piece of furniture is constructed. He uses pre-fabricated words and slots and screws them together with hyphens:

He takes words and clichés and assembles with them something very original. He leaves the poem as the customer leaves the place of  mass production and comes out to be filled with that vey human response of awe at finding himself under “an ever-changing sky/ and under all those burning stars, suns, systems.”

In “Bigger Picture” Jamison reflects again on the attempted tethering of the human, this time in the hum-drum work he must do as a teacher (or student teacher, perhaps): the lessons he plans must have “Objectives, outcomes” a “focus or a target / which is measurable, achievable.” These “terminologies / shoved down the trainee’s neck” are contrasted with the “open-windowed evening air [which] keeps him awake.”  He is prompted to ask: “when night is all stars and moonlight / is this good, satisfactory or inadequate?” The limiting technical language he is forced to use rebels under his pen, and a poem, a free-breathing, beautiful thing of individuality is written instead.

Jamison writes, as I said, about everyday life, and his range of the ordinary is broad. He writes about travelling by bus, travelling by train, travelling by plane, walking, hitting many varieties of golf ball, listening to Ash, listening to Them, listening to Kings of Convenience, looking at bridges, rivers,  trees, birds, dog turds, empty wine and beer bottles, eating in an empty diner, emptiness, Orpheus and the “sick at heart, up late, / dithering over each / and every unkissed kiss.” (“The Early Hours”) Always, behind the endless tumble of things, he returns to “the all-encompassing silence of ourselves.” (“At the End of the Day”)

Solitude is the soil out of which these poems grow. The note on the back of the book suggests that the collection “pivots on moments in which a solitary figure … takes stock of ‘time’s avalanches.’” Jamison is an observer, mostly alone, always noticing how things look, how they sound. This gives to the poems an immediacy which makes them feel fresh and good to read.

Many of his poems are memories. “The Curzon” for instance, recalls “my mother, my sister and myself” going to the cinema. But even a memory like this has a here-and-nowness about it that brings it to life. “I see us now,” he says, “late-ish, last minute for a matinee perhaps / all greeted by a darkened room and backs of heads.” Beautifully observed; and the poem’s conclusion is a reminder of what art – either on the page, in the theatre or in the cinema - can do: “seats are taken, lights are dimmed, minds blown.”

Jamison’s poems are both funny and wise and I particularly like “BALLS.”! The capital letters subtly suggest the tone and hint at the release to be had from simply hitting golf balls into Strangford Lough. He reports:

“to absolutely hammer a Slazenger
into some expanse of open water
is to reconnect with something instinctive, primal.”

As well as “hammer[ing]” the balls Jamison inflicts on them the following words: “Drive…hook…slice…smack…hit…nail…throttle.” In addition to this the balls are “pasted, belted, whacked, thumped, clattered, blasted…pinged, pranged, zinged, whammied, walloped, clanged, sizzled, smashed…” To have done this to a ball, he puns in conclusion, “undeniably, irrefutably, / indisputably, is to have lost it.”

Jamison is a philosopher, notably so in “Death’s Door,” “How to Live” and “Thinking about the Point of Things.” These ruminations are always witty: he uses language playfully to get to the heart of things, to find fresh words to say how the world is. This often results in poems of genuine beauty, like the following which I quote here in full:

Everything, relatively speaking,
is simple: a tree atree, the sky the sky,

And then come the starlings, tearing about,
Beautiful obliterations of the commonplace,

Going through the motions
Of their unchoreographed airshow,