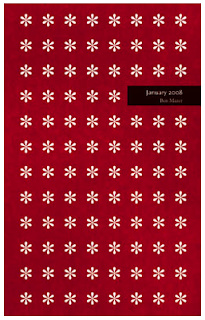 There is something very arresting and disarming about the poetic voice in January 2008. Encountering it is like encountering King Lear’s wise fool as he shatters sense and nonsense and reassembles from the pieces, new insights into the heart and vulnerability of a human being. In one of the smallest fragments in the book Mazer tells us that ‘My poem is a huge poem shooting through my head / because my friend, a poet, shot himself dead’ and January 2008 is a single poem, despite the layout which might indicate otherwise. In over one hundred and forty pages, and almost as many poetic fragments, only twelve of which are named, the poem loops back and comments upon itself, repeating phrases and interrogating it’s own truths by exploring different emphasis. Two of the fragments are repeated in full, the first with the same line breaks, on pages 84 and 102 and the second with different line breaks on pages 110 and 111. This second set of repetitions appears face to face in the book, and encapsulates how Mazer’s mind continues to return again and again to the memory of his friend. 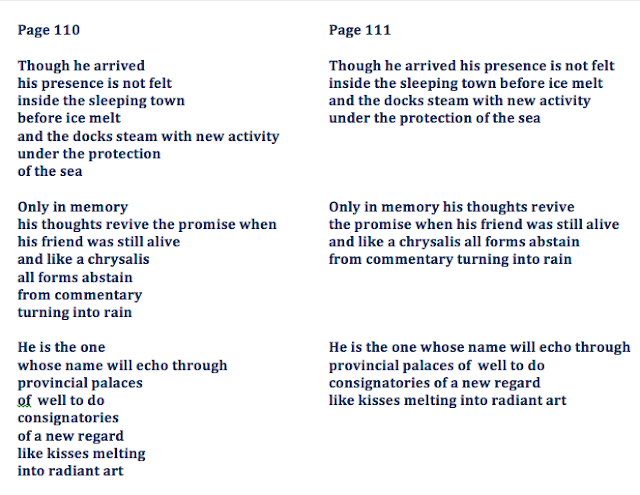 The stroke and subsequent suicide of his friend Landis Everson in 2007, coming only a year after his public recognition in the form of the first Emily Dickinson Award from the Poetry Foundation, affected Mazer profoundly. Throughout his recovery from this episode he continued to write the poetic fragments which make up January 2008, although he tells us that he has no recollection of them and that they survived intact only because he sent copies to his friend Stephen Sturgeon.  What is astonishing is that despite the trauma which backlights them, despite their repetitions, childlike riddles and rhyming schemes, a strong poetic confidence and integrity  is maintained, an integrity which seems to have been nurtured over years of study, writing and editing.   Throughout the book the images which recur are those of fragmentation, of the sea, rain and wind, of the town, of the instability of time, the desire to know what can be known, and ultimately the possibility or otherwise of love.
The images of the sea and the rain in the repeated sections above, when combined with images of the ‘stable fish’or the tramps who ‘sit and fish through ice-holes on the lake’and the ‘mythic predecessors [who] left their plans in loach museums’(loach museums being fish museums) cannot fail to recall images of the Fisher King in all of its many ancient and modern retellings. From its first written record in the 12th century, to TS Eliot’s early 20th century references to the myth in The Waste Land, and to the 1991 Terry Gilliam film, the image of the Fisher King has retained its archetypal significance throughout the centuries. The myth combines a powerful psychoanalytic message, as well as images of Christ, symbols of sexual anxiety and a metaphor for the decay of societies and civilisations.
The fragmentation of time and imagery which occurs throughout the book, where we are often not certain where memory has overtaken the present moment, recalls the ability of myth to be ever present and relevant in our subconscious and to describe the route which must be taken through the important turning points of our lives.  Mazer’s ‘mythic predecessors left their plans in loach museums’ and for him myth delivers, not the experience or the memory of pain, but a ‘vatic numbness’ ,  the foretold sadness and poverty of broken lives. His knowledge of myth as well as his particularly broken experience allows him to see the world, or Love or Christ

‘…. shin[ing] prismatically in shards of ice
that goes unnoticed otherwise, in view
to the strange traveller who on rain steps
past libraries of the wolves and hounds,
buried in darkness, family or spring’.

His ‘strange traveller’, conscious of the ‘libraries’ and of the imagery of myth, of the ‘darkness, family or spring’ is the conduit for the images in the poem. Seen through his eyes we are asked to look at the world through shards which may be temporarily out of place, but which with time accurately reflect not only his own experience, but the multiple facets , the fractured nature and lack of certainties of our modern life. The poem becomes therefore part of a new generation of poems, strange, sometimes difficult and demanding, but ultimately rewarding. Initially, January 2008 is unnerving because it seems to defy our need to make sense of the words and makes us aware that we don’t have the right questions. On second or subsequent readings however, we have gained a perspective which allows us to stand back from the individual fragments and to make sense of this particular poetic voice, a perspective which might be understood in terms of the cubist art or ‘cubes of words’ which Mazer refers to on p38:-

Picasso and Braque stripped off the top of talk
and sent each sidewise to the other down color
and under line into seeing. Cubes of words
replaced the pigments on their pallets
whey they painted, went to town.
Town came to them. The towns of ports and cities.
And splintered in the brilliance of morning.
Braque went down to Picasso and his brush asked
what color is it that I must already visit?
Picasso painted the town, tone and town.
Both painted portraits of Kahnweiler. 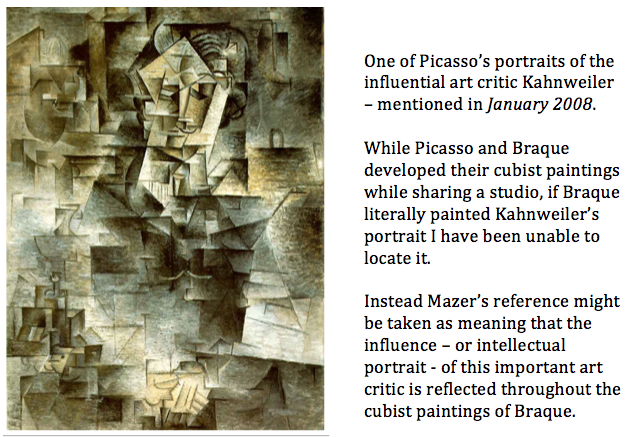 As in a cubist painting, the portrait or story behind January 2008 is self consciously fragmented defying a realistic representation. Mazer’s  ‘cubes of words’ are not static and incorporate both myth and memory into his imagery which continues to deliver shards of images like the ‘shards of pictures on a screen that never stops playing movies like each other’. Often his memories provide relief from the reality of his grief, projecting an ‘amber incandescence into the ductile leaning that the heart misses’  or ‘attenuat[ing] the senses till all is still, and real, examining the buckle calendars, the rounded edges of former prophecies, an island of peace'.  But the relief is temporary and the sense-defying grief returns, splintering sentences, requiring ‘Cookies and Lamictal’, to alleviate the depression and misery.
Cookies and Lamictal
The undershirt of my imagination stinks
with always persuading sheerly by tone
the remembered dipsticks of our latter winter
when to atone for me you went alone
to veering vetters of the current cutter.
I want to see, want to see Tyrone
Power play Philip Marlow.
Cut straight to the bone
I am not write. Won’t be this winter.

So much reminds him of his dead friend, that he cannot escape the reality of the loss. Images which Everson had used recur in Mazer’s book, showing that he is consciously continuing a conversation with his friend, quoting his poems and continuing to make Everson known to the public.  Rain as an image has a particular significance for Mazer because it connects him to Everson’s poem ‘Old Rain’ in which Everson writes

… that seen through new tears
old rain walks up and down
in the trees
outside
just around the corner
from what happened before.’

This ubiquitous connection, the old rain, the new tears and the on going sorrow, present everywhere in January 2008 openly explores what the death of Everson means to him. He locates his grief within the time and geographical frames of the book and the narrow gables which held him, aware that such a time of grief and sorrow, even the mention of the prescribed drug Lamictal, holds the danger of defining him or confining him within a narrow definition, when he writes that:

My love breathes through its walls to you.
I can’t replace the rocks and earth because
They for me now truly are you…..

…. The rains make trouble for the older rains,
beating their tones into sanguinity….
The older books – Yeats, Frost – still mostly care and
Touch me in the place where I am one
With all of dream and love these twenty years.
The narrow gables inside still define
The people who have slept inside these rooms
Or on the window seat have sat and wept.

But instead of being defined by his grief, the success of the poems define Mazer as a strong artist and resurrects important questions about the ability of art to transcend suffering. More a potential consequence rather than an answer to Job, Art, the story of Job itself, the drama of Beckett and poetry of Plath, and of Mazer, show that even at our darkest moments we are capable of expressing our broken state beautifully.  January 2008 can therefore stand as a challenge to us to choose which story to create from our own suffering. Do we become like Hecuba and die howling and pitied even by the gods, or like Job who maintains a connection with his religion and is ultimately rewarded through divine intervention, or Oedipus, whose dignity in the face of his destiny, raises the possibility of what a human being can aspire to be? I kid you not, Mazer’s book, including its brokenness, its childlike riddles and rhymes, will demand that you ask these questions of yourself.
Read it through once without trying to analyse everything and allow the rhythms and word play to have their time with your subconscious.  There are shadows where guilt and self-effacement sometimes linger. There are mentions of ‘Yeats, Frost’, ‘Dante’ and ‘Shakespeare’ and echo chambers in which many other poets such as Dickinson, Plath, Beckett and of course Everson, gather. But from the shadows and echo chambers emerges a haunting, vibrant work which demands a lot from its reader and is completely confident that the reader is capable of delivering.

Such an unusual poem warrants an unusual approach and in my own attempt not to be blindsided by the uniqueness of the images I fed the entire book into a word cloud to determine which words recurred most often. What I discovered surprised me somewhat but also explained why Mazer’s voice here is so arresting. In the following image only the one hundred words which recur most frequently in the book appear, and indicates that in this book, the possibility of ‘love’ dominates. 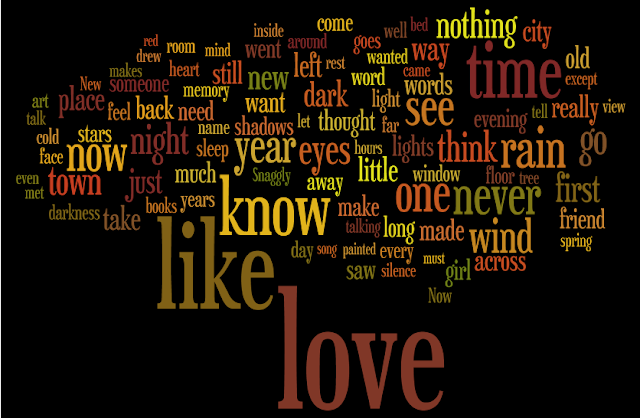 Despite the sadness, anger and trauma which appear to motivate and inform Mazer’s poem,  January 2008 retains an approachability because ultimately it depends for its transformative powers upon the possibility of love.  Just as Nietzsche’s philosophical enquiries demanded that the foundation of ethical life be peeled back, examined and recognised as a naked will to power the stark experience behind January 2008 seems to have demanded the peeling back and interrogation of what we regard as conventional linguistic and poetic protocol. The ‘bullet report’ which announced the suicide of Landis Everson also announced the death of conventional poetic protocol but could not claim the death of poetry for Mazer. What motivates him through this personal wasteland is also a will to power, but not in any superficial sense. What this word cloud indicates is that his will to power is a will to love, a way of forgiving his friend and himself for the failure in love and a route forward into a future.  January 2008 embodies what Mazer describes in his Prologue as the ‘single flash exposures’ which are

…. the art
of memory in the museum of
decisions in December of the heart
where the new year ascribes to love.

bites and easy images which we are told is required by todays readers. Ultimately it  confirms what William Carlos Williams tells us when he says that  'It is difficult to get the news from poems, but men die miserably every day for lack of what is found there'.