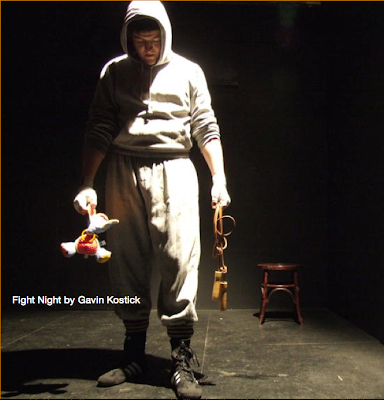 
"After 3 long months on the road, Fight Night now enters its
final week, playing lunchtimes at Theatre Upstairs, 1pm daily
until Saturday. This is your last ever chance to see the
show in Dublin. Come see for yourself what all
the hype is about."
- facebook.com/riseproductionsireland

Fight Night is pure theatre. A small intimate venue, a beautifully crafted script and a wonderful performance.  Whatever magic it is that visits when any good piece of theatre come alive, does the rest.

Gavin Kostick's script makes us laugh, its beautifully written moments of tenderness move us, and most of all it keeps us waiting for what happens next. It convinces us of the reality of the life unfolding before us. Although I have little interest in boxing Fight Night brought me effortlessly into the world of Dan Junior and his father (Dan Senior) for whom boxing is everything. Although firmly set in that world, the play is of course about much more than boxing. That "much more" begins with the birth of Dan Junior's son who, significantly for this family, is not named Dan. The arrival of Jordan into Dan Junior's life brings him back to boxing, back to his moment of failure six years previously, and back to his conflict with his father with whom he hasn't spoken since that moment. Becoming a father brings Dan Junior face to face with Dan Senior in a struggle for which boxing is a perfect metaphor.

The only actor on the stage is Aonghus Og McAnally. In his podcasts for Rise Productions (the first podcast went out a year ago today, coincidentally) he speaks about the intense physical preparation he undertook for this play and from the moment the lights come up we can see what he is taking about. He skips, shadow boxes, uses weights, does press-ups throughout the entire play - while delivering his lines. The fast physical work of a boxer sets the pace of the play and this is contrasted with moments of intense stillness.
In one of these moments Aonghus Og plays both Dan Junior and his partner Michelle, as they work through the emotional climax of their relationship. A simple change of body stance with a slight shift in lighting indicates that they are talking in her car one moment and sitting up in bed the next, while a subtle facial gesture  enables him to move effortlessly into the character of Dan Senior. Throughout the play, he keeps the stage alive with these characters allowing us to feel their pain, their frustrations and their hopes.

The intimacy of the venue helps bring out all these things in Fight Night. In the ring there is nowhere to hide and on this sparse stage, Dan Junior cannot hide from the audience which he addresses directly throughout the play, any more than he can hide from himself.

This is a brilliant show from Rise Productions and I look forward to their next play, Two//Stroke, which is currently in development.

I also look forward to my next visit to Theatre Upstairs @ Lannigans, a vibrant venue founded by Karl Shiels, Andy Cummins and Paul Walker. I won't have to wait long: Donal O Kelly's Alliliu Fionnuala kicks off there on Monday next, 5 November.

In the meantime, there are two performances of Fight Night before Aonghus Og hangs up his gloves: Friday 2nd and Saturday 3rd November at 1pm. Be there.