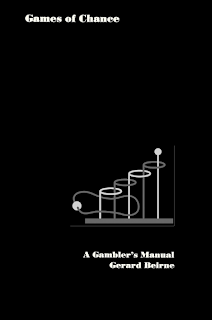 
Science has a special relationship to the physical world. Slowly and methodically it puts forward questions and hypotheses which are tested and assessed, and which have advanced our knowledge to the extent that we can now perform successful heart and brain surgery, we can immunise people against dangerous disease, we can begin to explore the depths of the oceans and the movements of the planets.

But science, in order to document and communicate its findings must use the methods of logic and draw language from the communal language pool.  This is the aspect of science which the poet Gerard Beirne engages with in his new collection of poetry Games of Chance. Beirne studied mathematics and engineering  and is in a strong position therefore to appreciate the stark beauty of the physical world which science uncovers but which scientific writers do not generally have the remit to engage with. His training gives him an insight into the equations of the mind, while his poetic sensibility allows access to the equally important equations of the heart. In his poems the paradigms of the scientific world are examined, and in revealing their strengths Beirne also reveals their limitations and these have to do with the limitations of logic. In ‘Two Methods of Proof’ he begins by telling us that:

given certain data
arrive at a conclusion

A premise:
an assertion given as true


He he first looks at the 'Rule of Detachment' and then writes that:

Equally aloof
the Rule of Syllogism
with it doctrine of inference
and the usual sound reasoning:

(a stanza following
The one that came before)

A transitive property of the conditional
The image
Implying the symbol

The ascent
before the fall.

The 'Rule of Syllogism' here leads to the realisation that the world is all we have, and that it is beautiful in all of its flaws. He points to the fact that in an Age of Reason, in an 'ascent' of the mind and of logic,   it is  easy to be deceived and to fall into the trap of believing that we understand everything. In doing so he seems to request a new Age, which grants the magnificence and power of science but is also wary of falling into the trap of closing our minds and believing that we understand 'all'. He does this by re-introducing the lessons of myth and the wisdom books of human creativity, which engage us with the story of the creation but warn us also of a 'fall'.  In this poem then the sure and certain knowledge which science brings is exhibited alongside our ability to create and to learn from our myths and metaphors. In a dispassionate way, Beirne is asking us to consider all of the possibilities. That alongside the knowledge of the world is our experience of creativity, our ability to create myth and poetry and that these yield other truths. In this poem it is left up to the reader to decide whether myth is subsumed, or reduced, under the aegis of science or whether creativity and imagination call to places beyond our current understanding.

Games of Chance opens with a cluster of poems which utilise logic and equations which  take the reader methodically through the paradigms and rules of science. Beirne then starts to introduce what is more recognisably poetic as in the poem ‘Galileo’s Method’. Here he shows us the human side of this wonderful scientist and imagines that in the course of his work he sees the fuller metaphorical implications of what that work means.

In the dark of night, Galileo
looking out for light
as another might watch
for a paramour
lanterns glancing from tower tops

and thus with the sun safely
beneath his feat
and all else who care
only for themselves
for the present fast asleep
Galileo and his observers separate
and while he waits
he chews on a stalk of grass
and contemplates light’s philosophy
the basic ingredient of life on earth
through gritted teeth he sucks the sweet sap
and whispers photosynthesis.

(light, his interpretation of his universe
transmitting information through a void).

Galileo, like a sailor, glances to the sky
his beloved constellations wink
while he from reflex blinks his eyes.

Another favourite poem was ROTATION TRANSFORMATIONS which highlights the personal and social cost to the individual scientist for making discoveries which did not meet with the approval of the church. Both Galileo and Copernicus suffered greatly for their scientific discoveries and yet, as scientists, were not willing to tow the party line and ignore the truth.

(the only possible deduction)

dispelling the notion
of an earth at rest
at the centre of the universe.

Incredulous at his own audacity
Copernicus repeatedly wipes his brow
and furiously paces his study.

All too aware of the consequences
the sealing of his fate
he looks down
observes the movement of his feet.

Thereafter:
the nature of rotation transformations
the ongoing search for the centre
the point about which all else revolves.

keeping his distance
maintaining his isometry.

While elsewhere all around him
the earth is stationary
motionless amidst concentric rotating spheres
of outdated postulations
the fear of a heliocentric theory replacing self
and God, that other great astronomer,
of little help.

Copernicus the church administrator
counts the cost
his uncle (Bishop Lukasz Watsenrode) aghast.
His world precessing on its axis
while Copernicus observes his own occultation
the obscuration of his greatest work
De Revolutionibus Orbium Coelestium.

Finding his own place in space
Copernicus awaits his death

And us? Even yet
our coordinates unknown
our centre unnamed
our images translated to another plane
a geocentric cosmology continuing to reign.


Beirne has a clear grasp of the philosophy of science and attempts to bring the reader through this to reassign value to the power of art and to the possibility of spirituality which is hinted at through art. I am not certain that he manages to do this in each of the poems. For example I found myself skipping through equations to get to the more recognisably poetic metaphors. Nonetheless,  the poetic quality from the selection quoted above inspired confidence and brought me back toward the earlier poems where I began to notice previously unrecognised insights such as those in ‘Conditional’.  When he introduces the idea of the conditional he shows that the truth of logic is conditional upon the truth of the premise, or opening statements. If the opening sentence is false however, then the poet is ‘under no obligation’ to follow its logic. This is the great secret of logic and an important thing for scientists to remember too. If someone states for example that ‘all swans are white’ and we draw conclusions from this, the conclusions may well be false if we then discover that there are black swans in . If the paradigms under which science operates are not true, then the conclusions drawn from such paradigms are equally not true.

Games of Chance will support many re-readings, and because of this, the full impact of the ideas should eventually make themselves known even to someone like myself who has to struggle with equations. The irony of my reaction is not lost upon me either and  seems to have anticipated by Beirne when he writes in the opening poem 'Statements':

Begin with ideas
(the William Carlos Williams' thing)
and end with the bane of man:
communication

Both objective and subjective ideas are difficult to communicate, the subjective especially so and yet art manages this in ways that science seems to be excluded from. Certainly by the end of the book Gerard Beirne has woven some very complex and beautiful poetry and I was intrigued throughout by the quiet intelligence at play behind the art. I hope that Games of Chance leads him to further explorations in this area and am certainly looking forward to the next outpouring from this writer.

BIOGRAPHY OF  Gerard Beirne: His novels are The Eskimo in the Net (London, Marion Boyars, 2003); and Turtle (Ottawa, Oberon Press, 2009).


His poetry collections are Digging My Own Grave (Dublin, The Dedalus Press, 1996); and Games of Chance – A Gambler’s Manual (Ottawa, Oberon Press, 2011).


His short story, Sightings of Bono, was adapted into a short film featuring Bono, and was published in Italy by Scritturapura Editore as a stand alone work in 2004.


He was runner up in the Patrick Kavanagh Award 1996 for Digging My Own Grave and was shortlisted for the Kerry group Irish Fiction Award 2004 for The Eskimo in the Net. He is a past recipient of two Hennessey Literary Awards including New Irish Writer of the Year. He completed his MFA in Creative Writing at Eastern Washington University in 1992.