The Dark Earth and the Light Sky


The Dark Earth and the Light Sky 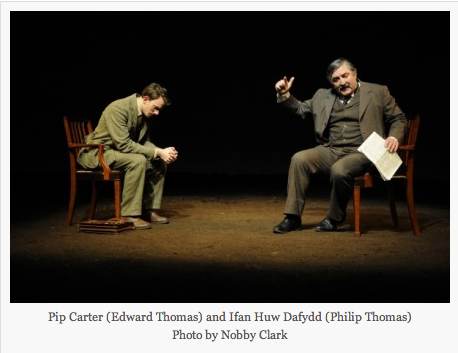 Reviewed By Pete Lawler.
I have the utmost admiration and respect for playwrights brave enough to attempt to reincarnate well known poets, Shelley’s ‘unacknowledged legislators of the world,’ on stage in order to shed some light on the mysterious cult status their lives seem to acquire; or use that mystery and status to explore some of the issues of our age. The last time I saw it happen was at The Unicorn Theatre in 2010, in Stephen McDonald’s play, Not About Heroes, which explored with beautiful subtlety that much speculated upon relationship (not least of all in Pat Barker’s Regeneration Trilogy) that has so enraptured the popular imagination between war poets Wilfred Owen and Siegfried Sassoon.
Nick Dear does something remarkably similar in his latest offering, The Dark Earth and the Light Sky presenting a relationship between two gifted artists, one inspiring the other. But Dear focuses on a far more unheralded and underrated poet – at least in his own lifetime – and arguably one whose poetry was less about war and more about poetry and beauty, Edward Thomas (Pip Carter) and his friendship with the American literary colossus Robert Frost (Shaun Dooley).
In doing so, there are a host of contrasts that make Dear’s work stand out. It is far more about Thomas’ love of the English countryside, realised with evocative simplicity through Bob Crowley’s understated design. The rural pastures of Gloucestershire become the terms through which Thomas negotiates a sense of self and a sense of Englishness, his existential struggle to articulate and define who he is. It is an enthralling personal struggle, with the encouraging Frost, played with a compelling sense of righteous certainty and pomp by Dooley, as his foil through which he comes to terms with himself and his eventual decision to enlist in the army at the age of 37, and fight in The Great War, a decision that would lead to his death at The Battle of Arras in 1917.
The interplay between Frost and Thomas is precise and as funny as it is poignant, the chemistry between the two sustained with natural ease and an adept sense of timing. But the real and deep sense of pathos comes from Thomas’ widow, Helen, on whose memoirs, much of the play is based. It is her accounts of her husband, the tenderness between the two of them, her Job-like enduring patience and moving grief later on that stir our hearts in this story. Hattie Morahan is spellbinding in this role, with a ferocious and unrelenting vivacity that perpetually draws you further into her own struggle to make Edward understood as a person and as an artist.
Frostian purists might not be pleased. Moving though I found this piece, I felt at times that there was a worthy struggle taking place onstage between constantly questioning and self-critical Englishness and a smugly certain American way of seeing the world that in the end, presents Frost as a distanced pontificating coward who refuses to accommodate other ways of perception into his own worldview. The play’s shortcoming is that it is too worthily bent on ennobling Thomas. This purpose magnifies itself into a debate about two different ways of seeing responsibility and the world, a debate that sits awkwardly when it is most pronounced on stage, reducing characters to symbols, near-caricatures, especially in the case of Frost, the brash, lordly American.
This is a human story though and whatever worthiness stumbles around the corners of its parameters is outweighed by performances that give us a beautiful depth of humanity and bring to life for us the poetic genius of Thomas.
The Dark Earth and the Light Sky is playing in London at the Almeida Theatre, Islington, until January 12th, 2013.
Pete Lawler, was born in Pennsylvania and is now living and working in London. His blog 'The American Londoner' can be viewed here:

Email ThisBlogThis!Share to TwitterShare to FacebookShare to Pinterest
Labels: drama