What may be the last poem written by Beckett, with an illustration by the wonderful Louis le Brocquy. 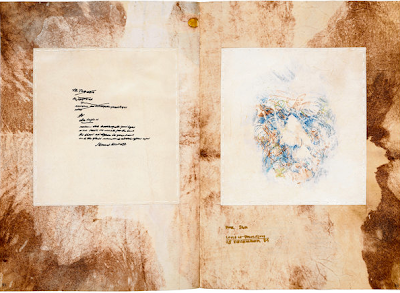 The Great Book of Ireland, a single copy manuscript book, containing the work of modern Irish writers and artists has found its permanent resting place in UCC.  It contains among many other treasures, what is believed to be the last poem ever written by Beckett, completed just a few weeks before his death. Further details from Theo Dorgan in this piece in the Irish Times.

Over the years, Bill Moyers has welcomed some of America’s best poets to share their works and inspiration. Many of those writers have performed at the Geraldine R. Dodge Poetry Festival, which Bill and his colleagues covered for television specials including Fooling with Words (1999), The Language of Life (1995) and Sounds of Poetry(1999). Below, enjoy a showcase of such poetry from past productions and very recently fromMoyers & Company, performed by the poets who dreamed them up, or by other artists who, like Bill, simply adore poetry.

John Banville will be the 2013 recipient of the PEN Ireland award for his contribution to Irish literature. This short piece from the Irish Times, is a reminder of all that he has contributed.

Details of his 2013 Irish PEN Award are here:
http://www.irishpen.com/wordpress/2013/01/14/john-banville-to-receive-2013-irish-pen-award-for-outstanding-achievement-in-irish-literature/

THURSDAY:
Djelloul Marbrook passed on a link to Poetry News - news on poetry which is continually updated.
Almost all the news you'll ever want on world poetry, including this story about Nabakov's poetry from Russia Beyond the Headlines: http://rbth.ru/arts/2013/01/19/nabokovs_poetry_ridiculous_or_sublime_21957.html

The full link to Poetry News is here:
http://www.topix.com/arts/poetry


FRIDAY
The Missing Slate: A must read for anyone involved in the arts.
http://themissingslate.com/submit-work/
Submissions are accepted in four categoreis: Visual art, Poetry, Fiction, Articles.  Submissions are open throughout the year but each category has a separate email address and guidelines.


SATURDAY:
The Poetry Bus - International print magazine with a 12 track cd of music and spoken word.
Publication date 5th February. It can be purchased online at
http://thepoetrybus.blogspot.ie/

Take a look at some of the illustrations, poetry and music involved in this unique magazine here:
http://vimeo.com/54036394

SUNDAY: The Patience of A Tree - A Memoir of Michael Hartnett
by poet Nuala Ni Dhomhnaill.  This short piece gives some insight into the life of Hartnett, the difficulties which he faced having chosen to write in the Irish language while the snippets of his poetry
hint at the power and dignity of his work.  http://metre.ff.cuni.cz/article/619

It was originally published in Metre an Irish based magazine which presented original poetry, reviews, interviews and essays from artists around the world.  This site presents a database of PDFs of original contributions to the magazine, and is hosted by the Faculty of Arts, Charles University Prague, under the auspices of the Centre for Irish Studies.