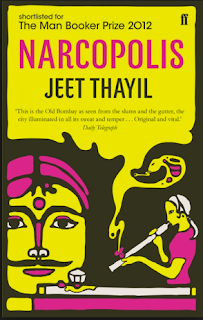 Winner of the South Asian Literature Prize in January 2013

Shortlisted for the Man Booker Prize 2012.

Narcopolis by Jeet Thayil is set in Bombay during the 1970s. The story flows outwards from the narrator who discovers his first opium den and who, through a haze of smoke and stories, slowly delves into the lives of those working in and patronising the den.  As it quietly unveils their personal stories it also examines the nature and authority of reality, the irrelevance of religion to the lived experience of those characters who still insist on identifing themselves as Christian, Muslim or Hindu, and it portrays the lowest of the low with such compassion and grace that it will haunt you for a long time after you've closed the final pages.

The character sketch of Dimple is especially affecting and in that story the predicament and  potential of humanity is revealed. Her life and indecipherable background draws out from her a prayer which Joyce would have been proud to call his own, funny in its confusion and a more accurate depiction of Dimple's life and experience than the standard rendition could have provided. Thayil tells us that the prayer

...was not Muslim or Hindu but Christian, and she said it to herself in English: Hell mary midriff god pray fussiness now and at thee owruff ower death.

Dimple's simplicity and honesty elevates her far beyond the fate that has controlled her life and she might be read as a testament to the indifference or sadism of a god who would abandon her in such a fashion. However, Thayil is not out to preach and reveals something rare but genuinely radiant about this character, and therefore about humanity itself.

The choice of 'Bombay' rather than its modern name 'Mumbai' is a fragment of the artistic licence and deference to art which, the novel seems to  indicate, contains more truths than the reported facts of the day. The name may also indicate his need to distance the story in some way from his present day existence, which is productive and drug free.  Such a distance however does not prevent  Thayil from exhibiting a deep empathy with his characters.  Already a published poet, he uses his poetic sensibilities to provide insights and revelations about their lives which libraries of sociological and human rights documents could not deliver. These poetic touches, the gentle pacing, the meandering form which delves in circular motions into and out of the lives of its characters, repetitions of motifs such as the Bombay music and the cry for 'Monica', work with the essence of the story adding unexpected depths. Refrences to the visual and musical arts are also interwoven as when  the prodigal artist Xavier tells his audience that:

Colour is a way of speaking, not seeing. Poets need colour, and musicians too .... If you want to make something genuine in this climate you have to think about indolence and brutality. Also: unintentional comedy. But there's no use saying this to you. You'll only misunderstand and misquote me ....

In Narcopolis it appears that Thayil is taking Xavier's advice and showing the colours, 'the indolence and brutality of' his character's lives and yet creating something genuine and ultimately beautiful from those elements. One of the many examples of Thayil's deliberately placed 'unintentional comedy' was the reading of Jesus as 'an unlicensed practitioner of medicine'. For Dimple, who belongs to everyone and no-one and who seems to have been born to suffer, all of the standards and practices of normal society are unfamiliar. Looking through her unjudgemental eyes, the hypocricies of the world are brought sharply into focus.

But what is also revealed is a rich cross cultural mix of modern and ancient, of Eastern and Western, writers, musicians, film makers and artists. We learn about the 'four historians of evil' - the writers Burroughs, Baudelaire, Cocteau and de Quincy' and there are references to many others such as Kafka, Rumi, Pound and Joyce. We see the quelling of the debate within the early People's Republic of China  about the nature of writing and art and the need to recognise that

... a work of art had its own rules and was subject to no limits other than those imposed by its creator's imagination or lack thereof. The characters in a work of fiction could not be depicted in mere black and white as in some overtly political work. Heroes, she said, were not always pure in motive and character, sometimes they told lies or were deceived....

The social, political and religious unrest which are a part of any developing nation are also present throughout the book. They form a backdrop to the unfolding lives and in the character of Jamal there is a hint of where tensions may increase.   However the focus on the internal world of the characters is so powerfully rendered that we are not overwhelmed by the politics or temporal quarrels.  Instead they are added to the long list of small tragedies which envelop the lives within Narcopolis. 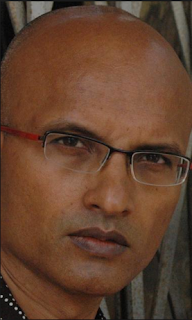 Jeet Thayil was born in Kerala in 1959 and educated in Jesuit schools in Hongkong, New York and Bombay. He is a graduate of Wilson College, Bombay, and he received an MFA from Sarah Lawrence College, New York.

He has published four collections of poetry, including English (Penguin/Rattapallax, 2004) and These Errors Are Correct (Westland Books, 2008), and edited Divided Time: India and the End of Diaspora (Routledge, 2006). He has received awards from the New York Foundation for the Arts and the Rockefeller Foundation. In 2004, he moved from New York to New Delhi and currently lives in Bangalore. He is editor of the Bloodaxe Book of Contemporary Indian Poets.

NARCOPOLIS is his first novel and is available from Amazon Uk: http://www.amazon.co.uk/Narcopolis-Jeet-Thayil/dp/0571275761

Email ThisBlogThis!Share to TwitterShare to FacebookShare to Pinterest
Labels: fiction