A fascinating look at the ironic and the un ironic in Ashbery and Creeley. - by Andrew Field from www.thethepoetry.com

'What do Ashbery and Creeley share besides a certain kind of disappointment, a disillusionment with what Richard Rorty calls “the way things hang together”? For, aside from this initial bewilderment or despair at the way things are – ontologically, epistemologically – Creeley is the poet of the anti-flow, the inept and inert stutter, the desperation of someone who cannot say what he wants to say, so makes a poem out of that.'
http://www.thethepoetry.com/2013/01the-ironic-and-the-un-ironic-the-role-of-the-hero-in-ashbery-and-creeley/ 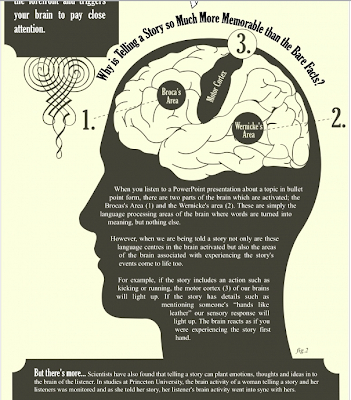 We've always known that stories, aphorisms and parables are more effective methods of communicaton. This short article explains the science behind the power of the story.

'When you listen to a PowerPoint presentation, ... two parts of the brain are engaged.... These are simply language processing areas of the brain where words are turned into meaning but nothing else.
However when we are being told a story not only are these centers of the brain being activated but also the areas of the brain associated with experiencing the events of the story's events come to life too.

For example if the story involves an action such as kicking or running, the motor centre of our brains will light up. .... But there's more ... Scientists have also found that story telling plants emotions, thoughts and ideas in the listener. In studies at Princeton University, the brain activity of a woman telling a story and her listeners were monitored and as she told her story her listeners brain activity went into sync with hers.
http://writerswrite1.wordpress.com/2013/03/27/how-writing-affects-your-brain/

And on the way we’ll share our life
stories, naming within that frame
bright guardian angels of our strife
with opaque demons of our shame.

Let’s hear the festive ocarina
sing, weep and perish, too-doo-loo,
no, not for a line of cocaine,
nor for a pint of heady brew.

It sings, fixed with a chain of metal
to a high hopeful reverie,
dilating like a burning prairie
within the widely narrowed pupil.

Let’s go. We’ve never been. The basket
of years floats by like numbered dreams
churned by Vlad Lenin’s damaged brains
inside his labradorite casket.

Dark clouds remain God’s secret lodge,
and in Red Square the earth’s become
a wall by oneiric logic
and all completely dark with time.

Let’s go then, us, let’s take the shortcut,
following the expiring sunrays,
our intellectual walk amusement
for the patrols of mounted sailors.

At the moment the search engine used for UNZ.ORG is a little unsophisticated. You need to know exactly what you are looking for. However, it does provide an extensive free library of written content to everyone on the Internet, eventually containing a comprehensive collection of high-quality books and periodical issues.Since all this content is intended to be permanently and transparently available, students, academics, and journalists may freely use this valuable content, perhaps producing additional writings hyperlinked to these important source materials. This content is provided, in part, for purposes such as criticism, comment, news reporting, teaching, scholarship, and research. 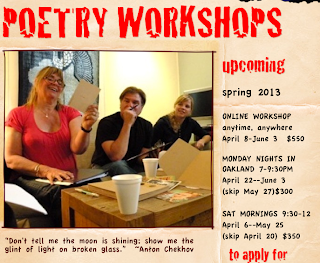 FRIDAY
I knOw yoU an exhibition showcasing a new generation of some 40 young European artists will open at IMMA on 19 April at Earlsfort Terrace. This article on the exhibition looks at what it means to be European.
http://www.goethe.de/ins/ie/dub/ver/en10715771v.htm