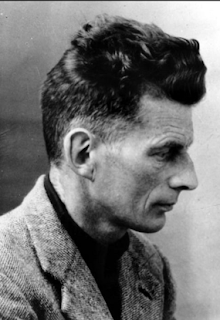 Before Vanishing, made up of four of Beckett's short pieces for theatre, and a fifth piece, a translation into Irish of Come and Go, is well worth catching before it does vanish. Including Ohio Impromptu, Footfalls, That Time and Come and Go, the presentation each piece by Mouth On Fire Theatre Company was superb.


Beckett is always fascinating to hear, but what came across to me about these pieces is how visually striking they are.  Everything in this production contributes to series of unforgettable images. In Ohio Impromptu Marcus Lamb and Nick Devlin are almost exact images of each other as one reads and the other listens to a story of loss and regret. The two actors, with long grey hair and dark costumes sit at a brightly lit table in an otherwise totally dark space. It becomes obvious that Reader and Listener are two aspects of the same person in much the same way as Krapp (in another play by Beckett coming soon to Dublin) is presented as a voice from his past on tape and, bodily, the wasted man as he is now. This is a motif Beckett uses again and again throughout his work. In this beautiful presentation, it is a moment on stage that stays with audience for a long time.


Melissa Nolan plays May in Footfalls and she brings to the part an intensity that will not allow us to take our eyes off her. Her costume, her movement, and the quality of her voice work together in what is a mesmerising performance. Geraldine Plunkett's voice as the unseen mother helps to make this a haunting piece of work. I must mention the lighting in Footfalls. It is one of Beckett's most difficult pieces to light because, in this play in particular, lighting adds an essential ingredient to the meaning of the play.  I was very impressed with the production company here, Mouth On Fire, who provided exactly the effect which Beckett wanted.

Marcus Lamb is the disembodied face that floats above us in That Time. Visually stark, it can take the audience a moment to make sense of what they are seeing.  As we watch we realise that we are looking down upon a man on his deathbed, who is gasping for his last breath, or 'last but one, but one'. We hear voices trying to put together several repeated strands of a story and as he fades the voices fade too, eventually vanishing into the darkness and silence which he came from.


Come And Go is one of Beckett's more accessible short works. It is carefully choreographed by Beckett and director Cathal Quinn, who did a wonderful job in all the pieces, is particularly good here. So are the three women played by Geraldine Plunkett, Melissa Nolan and Jennifer Laverty . Their movements are flawless and manage to convey the beautiful sadness expressed in the last line of the play delivered as  the women are holding hands, none of which has a ring: "I can feel the rings."


This last piece is played twice, first in English and then - appropriately for Seachtain na Gaeilge (Irish week)- as Teacht Is Imeacht.  Translated by Gabriel Rosenstock,  Teacht is Imeacht worked very well in itself, but I felt it might have been better presented first in Irish then in English. Having seen it in English, the audience is I think, too freshly familiar with it to see it all again. Hearing it in Irish first would mean most of the audience would still have something new to get out of a second performance. But that small criticism aside the overall presentation by Mouth On Fire Theatre Company was superb.