The longlist of books nominated for the 2013 Award has been announced. With 154 books, nominated by libraries in 120 cities, in 44 countries, in 19 languages, it's the most International of Awards.

With a prize of  €100,000, the  International IMPAC DUBLIN Literary Award is currently the world’s most valuable annual literary prize for a single work of fiction published in English.
Nominations include 43 American, 22 British and 12 Canadian novels, 8 by Irish authors, as well as 42 books translated into English from 19 other languages.

The second issue of the Battersea Review was published on line recently and a small limited edition print version will also be available shortly.

Poet and Editor, Ben Mazer announced this week that an extended version of his Tales of the Buckman Tavern will be released by the Pen and Anvil Press later in 2013. In this essay from the Battersea Review, D M Stewart looks at the philosophy behind Mazer's work.


Poetry has dimensions other than purely aesthetic ones,
quite uncontroversially, yet there is a force at work in
Buckman Tavern that compresses everything
ultimately into an aesthetic value. And it holds up.

Describing this lecture as 'a work in progress' Kiberd has the difficult task here of exploring the possibility of a sense of mysticism at work, especially in the early work of Beckett.

As always, his lectures take the listener deep into the history, politics and world of the artist and his down to earth compassion is always a welcome guide on the journey.

Read the Introduction to Dan Gioia's brilliant but controversial book. It's hard to disagree with his assessment of much of what is happening in the poetry and  publishing worlds. Much of it can be taken as a valuable check on croneyism, exclusivity and a failure to integrate poetry into the wider arts scenes, and to engage the wider public.

However, he does seem to take it for granted that there is an objective standard out there by which poetry can be assessed.
We instinctively feel that there is or should be such an objective standard and that  a work can be recognised as  valuable or not but is that in fact the case? Implying that there are critics, or newspapers whose imprimatur are more valuable may in fact just continue the self-serving, rather than public serving, nature of the modern business of literature.

If you are involved in being publishing or in having your work published, you need to read this.Comments, full blown disagreements and debate are especially welcomed on this ….
http://www.danagioia.net/essays/ecpm.htm

THURSDAY: Modern art and aesthetics.
This may in fact be a perfect balance to the above Introduction.  Graham Coulter-Smith's article 'Is everything beautiful?' looks at American Beauty and says that ultimately anything can be beautiful, but is probably not considered art.

His assessment is that artists today need a different skill set, that


'You don’t need to be able to paint, draw, sculpt, photograph or
video with any extraordinary skill, you just need to want to be
in that scene, and be socially and politically adept enough
(cool enough) to pull it off.'
http://artintelligence.net/review/?p=671#more-671

The scene which is referred to throughout is the 'plastic bag scene' from American Beauty. http://www.youtube.com/watch?v=Qssvnjj5Moo

The 4th edition of Poetry Bus magazine arrived this week. It will take time to read through the entire work, but an initial scan shows some up very talented writers and artists.

Bobby Parker's three page extract from COMBERTON is an understated and yet highly charged extract from his prose poem, fitting in beautifully with the surrounding poetic landscape of the magazine. It will grab the attention and it's brevity comes as a disappointment.

Poetry by Afric McGlinchey, Ian Duhig, Darragh Devaney, Fred Johnston, Lyn Lifshin, Sarah Clancy, Mike Absolom and Gerard Beirne was particularly striking. I loved the idea and contents of Chrisopher Barnes' two 'Film-Making' pieces  and was tempted to cut out some of the artwork in the magazine in order to frame it. Mike Absalom's illustration  'Attracta McCabe Walks her Coweens' in particular is wonderfully irreverent and humane.

An anthology like this is a challenge for the reader,  it's variety defying easy evaluation. Poems are presented singly and even where a poet has more than one piece included, they are separated and surrounded by the work of other artists.  As such it demands to be dipped into over time. The visual poems, artwork and the cd of music and readings are more immediately accessible and widen the appeal.  I was genuinely impressed with the standard of the work and will return to it over the months

Poetry Bus 5 is already looking for submissions and if you would like to contribute contact thepoetrybusmag@gmail.com.  It's a vibrant publication, open to new contributors, new ideas and artwork. Take a look at issue no 4 to get a sense of the lively community that you will be welcomed into:

The Ploughshares Emerging Writer Competition is now open for submissions: 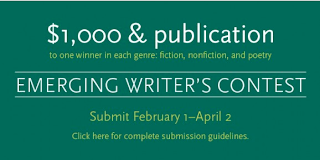 The 2013 Emerging Writer's Contest is open to writers of fiction, nonfiction, and poetry who have yet to publish a book, or chapbook.

The winner in each genre will receive $1,000 and publication in the magazine.
Deadline is the 2nd April, 2013.