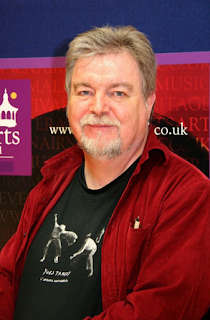 Fred Johnston's commitment to the Western Writer's Centre often overshadows his own ongoing career as a writer. Following on from his success in publishing his work at home and abroad we took a look at a selection of his poetry and were hugely impressed.

Johnston's poetry expresses a keen sensibilty to the fragile nature of the human psyche immersed as we are in the brutality of the world around us.  The poem L'Abbatoir expresses this very Beckettian awareness of the indignity which life often meets out. Like Beckett too, all three of the poems quoted below were originally written in French and subsequently translated.

The young woman writing in her note-book beside the river
Tells me that wars, murders and appalling tragedy are
The things one finds in that type of jotter: and in
A pretty girl’s pocket, at the river, we can find all the horrors
Of this world; broken promises and the kind of distress that exists
only in an abbatoir.

Any dealing with Johnston will quickly convince you that he is a very active, political and insightful commentator, often making life difficult for those who choose complacency over practical solutions. This has resulted in his gradual marginalisation by those in authority and in his sense of being a voice calling in the wilderness. In his poetry too there is a sense of his being an outsider, of being caught between two worlds and this is very clearly expressed in Le Rêve de mon Enfance.

My childhood ran
between two countries

Two nightmares, or
A love affair that breaks out in wartime –

Thus was I born
outside geography

lost in a supermarket
between the coffee

Archetypal images such as the lost child cut through the hint of biography here, exposing the  experience of the wider race, lost and abandoned in an unnatural and price tagged existence. The only sense of redemption comes from the slight possibility of communication, perhaps in relationships with the people encountered throughout the poems but more importantly with the reader.   Johnston is a keen observer however, and even that relationship with the reader he realises can often be a one-way street for a poet. In an Orphic image in 'Aux Yeux Bandés' he shows the blindfolded musician, singing 'the world's apologies'.

No one notices
The blind accordion player
No one hears
His street music.

And in his mouth
He sings the world’s apologies.

It is important to remember that many voices such as Fred Johnston's were forced into exile in the past. If we have learned anything from such mistakes we should recognise in Johnston's poetry and in his commentaries, an honesty and poetic value which are vital to the ongoing success of our cultural standing.

Further selections from his French and English work may be found in the forthcoming:
Weyfarer Poetry Journal
http://www.weyfarers.com/index.html

and in
The Galway Review:
http://thegalwayreview.com/2012/11/09/five-poems-bu-fred-johnston/