All My Sons directed by Michael O'Meara

The original production of All My Sons, Arthur Miller's first successful play, opened in New York in 1947, directed by Elia Kazan. In the play Miller looks at the idyllic suburban life many Americans aspired to following the Depression and the Second World War. More importantly, Miller applies what he has learned from Greek tragedy and from Ibsen to explore the sordid sacrifices made by ordinary people in order to have this prosperous way of life. In All My Sons many such sacrifices are made and are either covered up or justified by self-deceiving reasons. Joe Keller sacrifices his business partner Steve: he destroys his life and tears his family apart so that he and his family might be comfortable. The lives of twenty one pilots are sacrificed so that Joe's business might continue to operate and make money. And, throughout the play, truth is sacrificed. People - not just Joe - lie and deceive themselves, their families and their neighbours in order to achieve the American Dream. The power of Miller's modern tragedy is the way in which it gradually strips away these lies, keeping the final truth from many of the characters and from the audience right up to the final moments of the play.

This production by SPARC, directed by Michael O' Meara succeeds in setting up the too-peaceful suburban scene right from the opening. The clean white set (designed by Brian O' Connor) fronted by a neat lawn is disturbed, deliberately, by the jagged shape of the storm-struck tree. Patrick Burke's lighting gives up the feel of a peaceful, sunny Sunday morning. His attention to colour and shade will lead us over the course of the play from this sunshine into the twilight and the dark which will engulf the Kellers. Fionnuala Nig Shamhrain's costumes and Elaine Patton's sound combine with the set and the lights to bring us back to 1940's America. 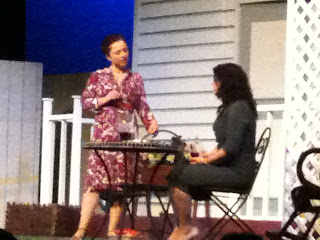 The actors used a very natural, almost at times a method-acting style of presentation. This helped build the calm, casual atmosphere with which the play begins, and allowed them to gradually introduce and build the tension right to the end of the play. Michael O' Meara's pacing helped keep this shifting of mood under control. Des Slowey and Imelda Mc Donagh played Joe and Kate, and were particularly convincing. We felt for both of them even as we realised the lie they have been living for years. Colin Carpenter gave us the unsettling sense of being rather than acting as the complex Chris. He caught the nuances of this central role admirably. Carol Broderick played Ann, a difficult role: she wants to join the Keller family by marrying Chris, yet she knows that Joe Keller caused the death of his other son and her first love, Larry. Conor Bredin was a very good George, Ann's brother, who appears only once, and has to carry the plot in a crucial scene. The neighbours provide the context in which the tragedy unfolds, and they show us the typical way in which a community colludes in a piece of mendacity nobody wants to talk about openly. Sue Bayliss (Felicity Kearney) and her husband Jim (John Clarke) live their own lie, and Sue hates the Kellers for being "The Holy Family" and for inspiring Jim to pursue his ideals rather than provide for the family. Brian Comaskey brought a welcome comic touch to the part of Frank, while Fionnuala Nig Shamhrain (as Frank's wife Lydia) beautifully, with a touch, showed us what might have been between herself and George had the Keller tragedy not happened. Joe Gallagher  played with great vivacity the role of Bert, the neighbour kid who plays policeman under the command of jail - keeper Joe Keller.

When the lights came down at the end of this deeply affecting piece of theatre, the audience sat in silence for a long moment before breaking into applause. This play might be sixty-six years old, but it still carries the power to shock us.

Email ThisBlogThis!Share to TwitterShare to FacebookShare to Pinterest
Labels: drama