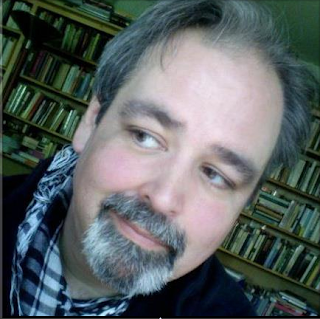 Robert Archambeau has been called 'our smartest poetic sociologist' by the Journal of Contemporary Literature. A poet and literary critic whose works include the  just published The Poet Resigns: Poetry in a Difficult World (2013), Laureates and Heretics (2010), Home and Variations (2004) and, Citation Suite (1997). He has also edited a number of works, including Word Play Place: Essays on the Poetry of John Matthias, The &NOW Awards: The Best Innovative Writing, and Letters of Blood: English Writings of Göran Printz-Påhlson. He teaches English  at Lake Forest College near Chicago.


Earlier this week he  shared this paper which he delivered at the The Louisville Conference on Literature and Culture Since 1900 called 'The Open Word: A letter to Peter O'Leary' on the Samizdat blog, which is one I highly recommend subscribing to:     http://samizdatblog.blogspot.ie/2013/02/vocabulary-and-opening-letter-to-peter.html

Robert's author page at Amazon will provide links to the various books still in print: http://www.amazon.com/s/ref=ntt_athr_dp_sr_1?_encoding=UTF8&field-author=Robert.%20ARCHAMBEAU&search-alias=books&sort=relevancerank 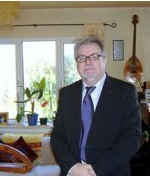 In that time it has organised festivals, creative writing courses in Irish and English, book launchings, as well as innovative events, such as a writers' residency (the very first) at a Galway hospital, a 'Poetry on the Buses' project, a 'Poetry Day' event, a Dylan Thomas weekend at Ennistymon, Co. Clare and the annual Forge at Gort Literature festival in Gort, Co. Galway.

The Western Writers' Centre also organised, in co-operation with the Arts Council of Northern Ireland, a weekend celebration of Northern Irish literature, which included work in Ulster Scots. For some time the Centre published a full-colour literary news sheet which was sent to arts' groups and centres throughout the West of Ireland. The Centre has also worked on projects with Aosdána.

The Centre is a drop-in resource for information on writing, publishing, editing and general literary advice, is the only writers' centre West of the Shannon, and is ably administrated by Barbara Quinn, a native of Inishmore, Aran Islands.

Future plans for the development of the Centre include finding suitable premises which will also house a museum to commemorate the literary heritage of the West of Ireland, and a larger working and reading space.

The Centre's most recent project is a successful on-line Creative Writing course covering poetry and prose. The course, which extends over eight sessions, engages participants with various styles in poetry and prose as well as providing interactive follow-up and discussion and reading suggestions. To date, the course has attracted participants from Australia and the UK and United States, as well as closer to home. Fees are modest ( €150 and €80 concession) and full details can be obtained from westernwriters@eircom.net or (091) 564822 ext 312.

The Western Writers' Centre relies on sponsorship, individual and corporate  and is interested to hear from anyone who might consider such support. Sponsorship participation receives free admission to courses and events in any given year. Sponsorship is acknowledged on all press and publicity material and ranges from €50 (limited access) to full access at €250. The Centre has a Facebook page and is particularly interested to work with or for arts' groups, community groups and festivals.
https://www.facebook.com/western.writerscentre?fref=ts

Mick Timony sent this link to an online arts and letters paper which promises a mix of literature, aesthetics, ideas, criticism, culture, trends and breakthroughs.  If your Sunday paper isn't big enough, look through the Arts & Letters Daily here:http://artsandlettersdaily.com/

ONE OF THE ARTICLES WHICH CAUGHT MY EYE THIS WEEK VIA THE ARTS AND LETTERS DAILY WAS ON THE NEED FOR A PRO-ACTIVE INTELLECTUAL COMMUNITY:


In May 1943, James B. Conant, the president of Harvard University, published an essay in The Atlantic Monthlytitled “Wanted: American Radicals.” Conant was on the lookout for “a group of modern radicals in the American tradition,” whose ideas would encompass Thoreau and Whitman, Emerson and Marx, and who would be “lusty in wielding the axe against the root of inherited privilege” so as to prevent the growth of “a caste system.” His proposal? The imposition of “really effective inheritance and gift taxes and the breaking up of trust funds and estates.” Conant, whose essay infuriated Harvard’s well-heeled trustees, was hardly a radical himself; he was, and would always remain, a man of the establishment. But in those days, college and university presidents did not limit their activities to fundraising, shmoozing, paper-pushing and administration. They had access to bully pulpits, and they occupied them.
Full article is here: http://www.thenation.com/article/173015/university-presidents-speak-out?page=full#

Yahia Lababidi is one of the most eclectic and stimulating writers and it was a pleasure to read one of his essays on Oscar Wilde. Lababidi has been a fan and advocate for Wilde for most of his writing life and here looks at the lasting appeal which Wilde has with the public. 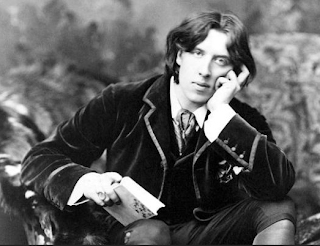 The currently high esteem Oscar Wilde is held in by the French and Germans may seem odd to an Englishman. But the enduring fascination Wilde exerts on the modern mind is certainly reciprocated in contemporary England — the stained glass window in Westminister Abbey (1995) — alongside luminaries like Pope, Housman, Marlowe; the monument near Trafalgar Square(1998) as well as the more recent Oliver Park film adaptations ofDorian Gray (2009), The Importance of Being Earnest (2002) andThe Ideal Husband (1999). In fact, in the last decade, there have been at least seven film adaptations of The Picture of Dorian Gray alone; and needless to say, the effervescent plays themselves (which established Wilde’s reputation as ubiquitous wit) are never quite offstage.
In 2004, at a Sotheby’s auction of a trove of Wilde material almost everything was sold to private buyers or British dealers, with the notable exception of a vitriolic attack (Wilde Myth, an unpublished book) by his tempestuous lover, Lord Alfred Douglas, as well as a photograph of Wilde on his deathbed. Which is to say that, over a hundred years after his death, Oscar Wilde still lives in the public imagination and that love for him unabashedly dares to declare its name.
Read the essay here: http://www.cerisepress.com/02/06/wilde-more-lives-than-one/view-all 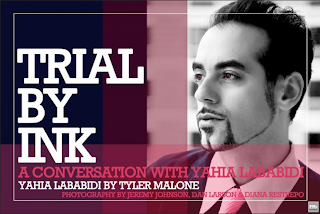 YAHIA LABABIDI‘s latest book is Trial by Ink: From Nietzsche to Belly Dancing (Common Ground Publishing, 2010). His Signposts to Elsewhere (Jane Street Press, 2008) was selected for “Books of the Year, 2008″ by The Independent (UK). His essays and poems appear in such publications as Harper’s, AGNI, World Literature Today, Hotel Amerika, Philosophy Now as well as several anthologies. To date, Lababidi’s writing has been translated into Arabic, Slovak, Swedish, Turkish and Italian.

THURSDAY:
How and more importantly why, do some books seem to come from nowhere onto a best-sellers list only to disappear the following week? This article from The Wall Street Journal gives some idea of the value of such a listing:


Last August, a book titled "Leapfrogging" hit The Wall Street Journal's list of best-selling business titles upon its debut. The following week, sales of the book, written by first-time author Soren Kaplan, plunged 99% and it fell off the list.
Enlarge Image 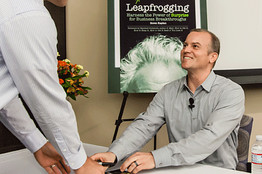 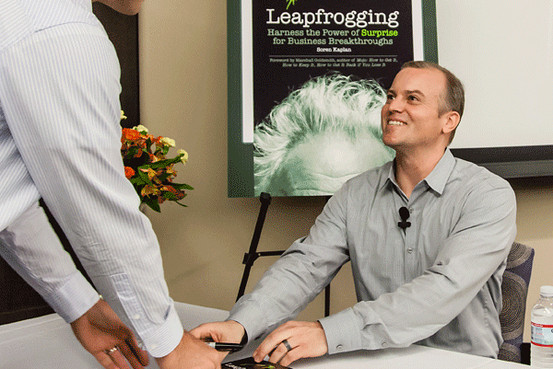 Soren Kaplan
Something similar happened when the hardcover edition of "Networking is Dead," was published in mid-December. A week after selling enough copies to make it onto the Journal's business best-seller list, more hardcover copies of the book were returned than sold, says book-sales tracker Nielsen BookScan.
It isn't uncommon for a business book to land on best-seller lists only to quickly drop off. But even a brief appearance adds permanent luster to an author's reputation, greasing the skids for speaking and consulting engagements.
Mr. Kaplan says the best-seller status of "Leapfrogging" has "become part of my position as a speaker and consultant."
Full article here:
http://online.wsj.com/article/SB10001424127887323864304578316143623600544.html?mod=itp 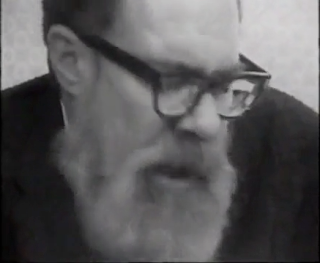 With the publication of Homage to Mistress Bradstreet, John Berryman finally broke into the public consciousness as a boldly original and innovative poet. Nevertheless, no one was prepared for the innovation that would follow, a collection that would seal Berryman's reputation as an essential American original: 77 Dream Songs, which was published in 1964 and awarded a Pulitzer Prize, unveiled the unforgettable and irreppressible alter egos "Henry" and "Mr. Bones" in a sequence of sonnet-like poems whose wrenched syntax, scrambled diction, extraordinary leaps of language and tone, and wild mixture of high lyricism and low comedy plumbed the extreme reaches of a human soul and psyche. Djelloul Marbrook shared:

In succeeding years Berryman added to the sequence, until there were nearly four hundred collected as The Dream Songs.


Berryman reading from The Dream Songs 1968, only four years before his suicide. http://www.youtube.com/watch?v=tBbUjDoV16o&feature=endscreen


You can find transcripts of his poetry, and further information at the Academy of American Poets: http://www.poets.org/poet.php/prmPID/6 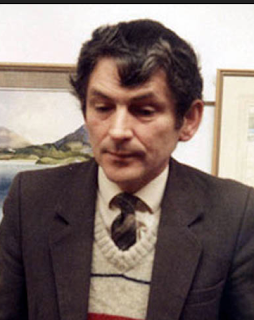 dates for their 2013 Festival.

This festival is an exciting weave of Irish and international poets and writers, singers, dancers, actors and storytellers with the weekend comprised of readings, lectures, concerts, dance and theatre performances. Irish culture, exciting, warm, participative, is on show, what poet Michael Hartnett would have described as the ‘harp side of the Irish coin’. Irish poets and writers collide with international literary guests creating a festive weekend that lends itself to lively gatherings, easy conversations and spirited debates. Events sprawl over the town of Newcastle West, a medieval town described as the heart of Desmond country.  Bustling and energetic, the town’s library, court house, medieval castle, shops, pubs and streets become ad hoc performances spaces. The festival’s outreach programme extends into all the towns primary schools, a wide number of the county’s post primary schools, the community hospital for the elderly, day care centres and the local Cheshire Home.